Laboratory studies have shown that titanium-containing sands can be effectively enriched by the method of continuous barrier magnetic separation, in which the separation of magnetic and non-magnetic particles and their removal from the separation zone occurs without the use of rolls or any other moving parts. To remove magnetic particles attracted to the walls of the plates, an electrostatic field is created in the gap between the plates. When enriched in two stages, the obtained technological indicators are superior to those of an industrial roller separator.

Magnetic enrichment of mineral sands is carried out on electromagnetic roller separators. This method involves the attraction of magnetic particles to the roll, their removal from the magnetic field during rotation of the roll, and the subsequent unloading of magnetic particles into the magnetic separation product. The use of rotating rolls gives rise to a number of disadvantages of these separators. So, the power consumption of the roller separator 2EVS-36/100 is 25 kW. Of these, 15 kW, that is 60%, goes to the rotation of the rolls and only 10 kW is spent on creating a magnetic field. The drive and roller bearings require constant maintenance, significantly complicate and cost the separator, reduce its reliability.

We have developed a fundamentally new barrier magnetic separator for dry granular materials, devoid of this drawback.
Laboratory studies were performed to separate the mixture of ilmenite (magnetic fraction) and rutile (non-magnetic fraction), which is a conductive fraction of the rough concentrate of the Verkhnedneprovsky mining and metallurgical plant. Enrichment was carried out on a laboratory separator, a diagram of which is shown in the figure. In the interpolar gap of its magnetic system 1 is placed a separation matrix consisting of ferromagnetic plates 2 installed with a gap of 3 relative to each other. The symmetry plane of the gap is vertically along the magnetic field. 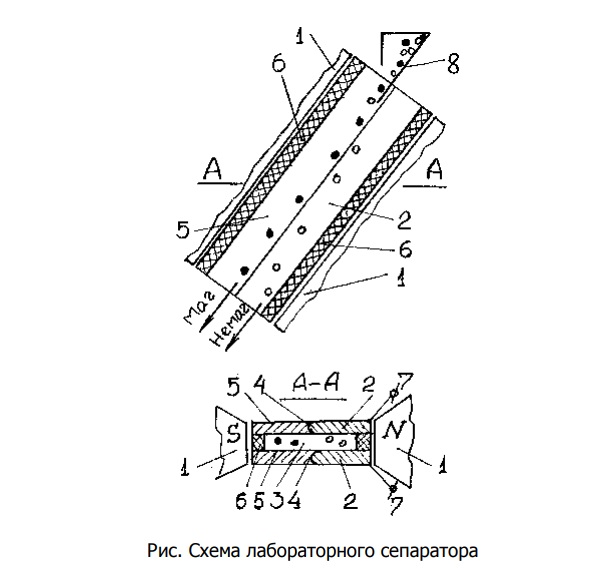 Magnetic particles under the action of magnetic forces directed from the plane of symmetry of the gap deviate to the walls of the plates. With the accepted location of the plane of symmetry of the gap between the plates along the magnetic field, the magnitude of this force is minimal? 2 ?, but it can be sufficient so that particles with increased magnetic susceptibility are attracted to the plates and accumulate in the gap, disrupting the separation process. To remove these particles, a high voltage of the opposite sign is applied to the opposing plates.

The attracted magnetic particles acquire the same electric charge as the plate with which they are in contact, and therefore repelled from it. Moving in an electric field, charged particles are attracted to the opposing plate having a charge of the opposite sign. Having come into contact with it, the particles change again
sign, push off and move towards the opposing plate. While moving from one plate to another, these particles are supported by a magnetic barrier force directed from the gap between the ferromagnetic plates and, like all other magnetic particles, are transferred to the magnetic separation product. To indicate that in
An electrostatic field is created by a dry barrier magnetic separator; in the future it will be called “Mag-electro”.

The presence of an electric field in the separation zone, which powerfully affects the movement of particles between the plates, cannot but affect the enrichment indices. To determine the degree of this influence, the conductive fraction was separated in the presence and without an electrostatic field (Table 1) with a magnetic field induction of 1.3 T. The enriched material was fed into the gap between the plates with a capacity of 11 g / s, which corresponds to the expected specific productivity of the industrial separator q = 2 t / h per one meter of the front of the power supply. 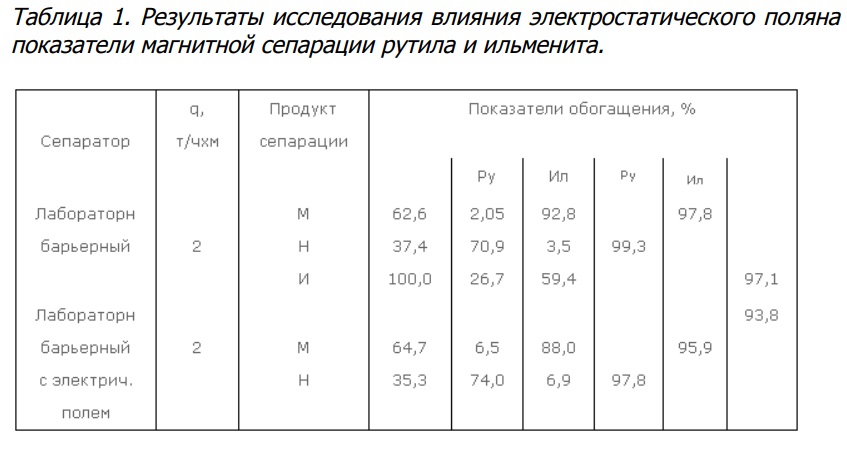 Under the accepted separation conditions (q = 2 t / h? M, magnetic field induction B = 1.3 T), the loss of expensive rutile in ilmenite concentrate is less than during the operation of the 2EVS-36/100 industrial roller separator (Table 2), but the specific productivity of the Mag-electro laboratory separator is obviously low. For
to increase the specific productivity without increasing mutual clogging of the separation products, the induction was reduced to 1.1 T, and the enrichment was carried out in two stages of separation. The enrichment results are shown in Table 2. The following conventions are used in the table: M1 and M2 – magnetic products of the first and second methods separation; H is a non-magnetic separation product. 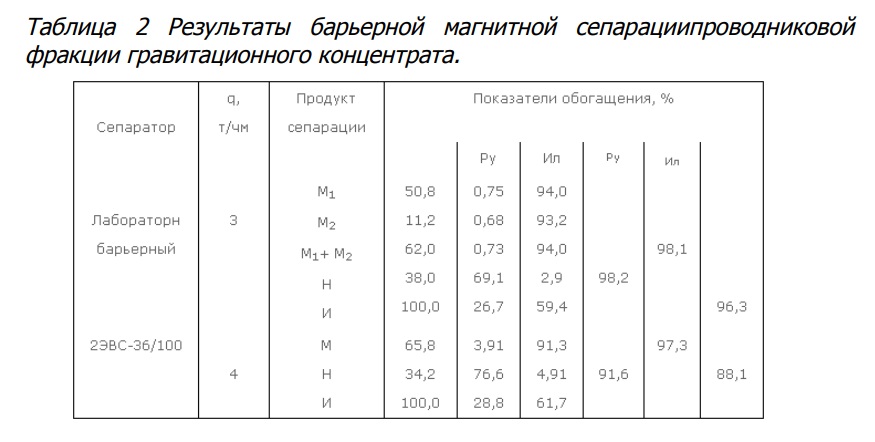 A comparison of the performance of the Mag-Electro laboratory barrier separator with the performance of the 2EVS-36/100 industrial roller separator shows that the extraction of ilmenite into a magnetic product is approximately the same in both cases. The content of ilmenite in the magnetic product of the barrier separator, which is
finished concentrate, higher by 2.7%, which increases its competitiveness. Due to the better purification of the magnetic fraction, the content of rutile in the non-magnetic Mag-Electro product decreased due to the increased intake of zircon and distene, which are conductors. They must be removed from rutile concentrate.
subsequent electrical separation.

The main advantage of barrier separation is an increase in the extraction of expensive rutile in a non-magnetic product by 6.6%. This is such a large increase in extraction that the acquisition and installation of two new Mag-electro separators, operating in series, will pay off in less than two months.

The use of the Mag-Electro barrier separator, which does not have rolls and a drive, will allow:
● reduce energy costs by 60%;
● simplify separator maintenance;
● reduce downtime for repairs.
An important advantage of barrier separation is the ability
increase the extraction of expensive rutile in rutile concentrate
more than 6%.